Madam: A Novel of New Orleans by Cari Lynn and Kellie Martin. Reviewed by Louise Hilton. 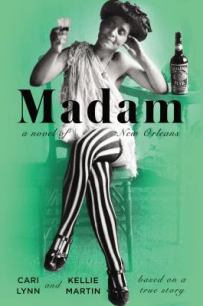 Madam is set in 1897 New Orleans and centered around Mary Deubler, a prostitute in Venus Alley, a seedy area of the city that would soon be formally incorporated as the official red-light district known as Storyville. Mary is a well-developed character, perhaps due in part to the fact that she is based on the real-life Josie Arlington, one of the future Storyville’s most infamous madams.

We follow her trajectory from her time as Mary, the impoverished streetwalker with dreams for a better life for herself and her family to her reemergence as Josie, the refined and glamorous doyenne of one of the city’s so-called “sporting establishments”. The authors certainly capture the raucous environment of the Big Easy, replete with salacious details of the seedy underworld scene, licentious politicians, and cameos from colorful notables including Louis Armstrong and “Jelly Roll” Morton.

Having grown up in Louisiana, I had a few quibbles with some of the setting details: jambalaya does not have beans in it as the authors mention in one scene; it’s a café au lait that they serve at Café du Monde, not a “coffee au laits”; and we call them crawfish down here, never crayfish. Shudder. Overall though, Madam is an entertaining read.