X vs. Y: A Culture War, a Love Story by Eve Epstein and Leonora Epstein. Reviewed by Louise Hilton. 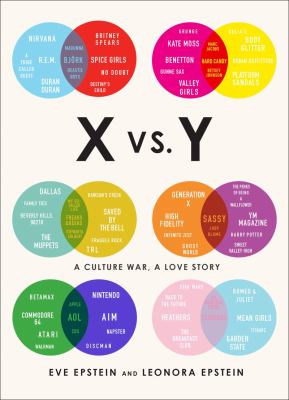 X vs. Y is a cultural study written by two sisters, Eve from Generation X, and Leonora from Generation Y. They use Generation X to describe people born in the mid-sixties to late-seventies while Generation Y or millennials refers to people born around the early 1980s to late-1990s. The Epstein sisters discuss the differences (and overlaps) of their respective generations when it comes to such topics as pop culture (with chapters devoted to Books, Music, and Movies), dating, and technology. With lots of Venn diagrams and other fun graphics showing the major pop culture references of each of these categories, X vs. Y is a quick and entertaining read.

As a Gen Y-er, I had to laugh reading Leonora’s essay “How Cher Horowitz Became Gen Y’s BFF” extolling the virtues of the movie Clueless: “1997 was a big year for me. I learned leg hair was a scourge to be eradicated at all costs, Jockey training bras were the bomb, and Clueless was the greatest movie ever.”

The authors conclude with an interesting point about the newest generation: “Because Gen Zers have unprecedented access to information and media from both the past and present, they’ll face a different sort of challenge: figuring out how to locate value in the sea of media and entertainments they’ve grown up in. Eve has nostalgia for Sesame Street because it was one of three TV shows she ever watched as a child; would she have felt the same way if her options had been effectively limitless?” (My guess is yes, she would have because – let’s face it – Sesame Street is one of the best things ever.)